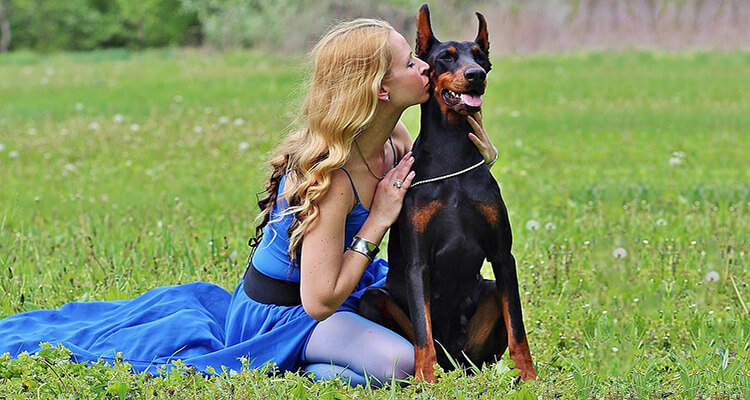 The Doberman is often seen as a fierce, protective, intimidating breed. While they are excellent guard dogs, the Doberman also makes an excellent pet. The Doberman Pinscher or Doberman is a powerful and muscular member of the Working Group developed for police and military work and a protector and companion in the home.

If you own a Doberman and would like to share information with us or have pictures that you would like to be included in our dog gallery, we would love to hear from you. Contact here

Here are 10 surprising Doberman facts to help better inform you about this majestic breed.

Unlike some dogs that have been hanging around since ancient times, Dobermans are newer to the scene. The Doberman is a genuinely new canine breed. The Doberman breed is less than 150 years old. Originating in Germany in the early 1880s.

A Tax Collector first reproduced the Doberman by the name of Herr Karl Louis Doberman. The Doberman is an also known as Doberman pinscher or Dobermann.

2). Their First Breeder Was Tax Collector

The first individual to breed Dobermans was Louis Doberman. It was a German assessment collector. The breeder was not a professional, but the dog he created was filled with the qualities he wanted.

Louis Doberman reared the Doberman, and these puppies were named after him.

He is a medium-measured puppy that has short hair and is exceptionally solid. The Doberman is one of the most elegant and good-looking breeds. Normally measured litter is 8 puppies; however, this can ordinarily run somewhere between 3 to 10. Although the breed standards vary among kennel and breed clubs, according to the FCI standard, the dog typically stands between 68 to 72 centimeters.

4). The Doberman is actually a mix of a number of dogs

The Doberman is a mixed breed. This breed was developed by mixing others like the Rottweiler, German Shorthaired pointer, Weimaraner, Manchester terrier, Beauceron, Great Dane, black and tan terrier, and a greyhound.

The breed is believed to have been created from several different dogs’ breeds with the characteristics that Dobermann was looking for it.

5). The breed got its own movie

The Doberman is a Film Star. In the 1972’s a film called, The Doberman Gang was made. It’s a film about “six savage Dobes with a thirst for cold cash that leaves banks bone dry.” two sequels were made of the film.

Dobermans can do any job. Dobes have been used for police work, coursing, scent tracking, diving, therapy, search and rescue, and guiding the blind. Dobermans are ranked the 5th smartest dog breed.

Dobermans, which were prepared to be monitored pooches, conveyance mutts, delegate canines, and even puppies of leniency, helped the medical corps discover the whereabouts of harm warriors. The Doberman is flawless watch canines and would ensure their proprietors or families even at the cost of their lives.

Dobermans are a very intelligent dog. Dobermans are the 5th smartest breed and easily trained. The Doberman’s characteristics of knowledge, trainability and grit have made him fit for performing a wide range of parts, from police or military puppy to family defender and companion.

8). The Doberman is a war hero

Kurt the Doberman was the main canine casualty in the 1944 Battle of Guam amid WWII. During World War II, Dobermans served the U.S. Marine Corps in their war dogs program.

The dogs were used throughout the South Pacific to lead patrols through the hot, dense jungle, guard troops at night while they slept, and warn hidden enemy combatants waiting to carry out an ambush.

These dogs are energetic and need a lot of exercises. They have great running speeds. The Doberman requires an open area where he can run at top speed. A solid Doberman can keep running up to 44 kph.

10). Good With Family and More Gentle

Doberman makes great family companions. They grow great understanding and solid holding with their owners. They cannot live alone for long interims and would soon get focused and exhausted. The Doberman has been bred to be much more loving and gentle.

Share these Doberman facts with your friends who love dogs!

Check our Video guide to top 10 amazing facts about doberman

Also read:  Top 10 benefits of having a Beagle