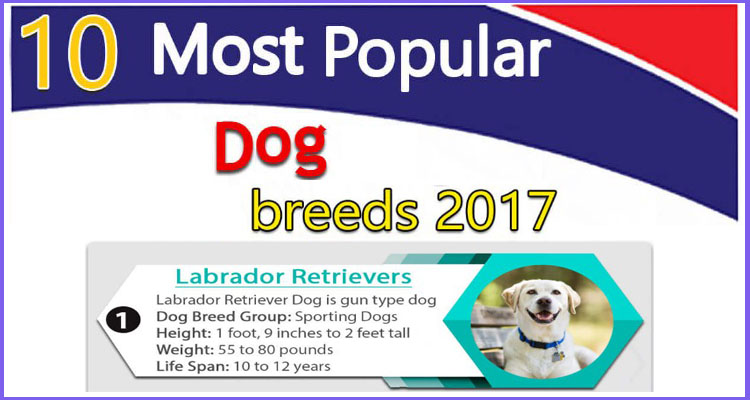 The list of the most popular dogs in America has released by The American Kennel Club. We tried to give some information about these dogs in a graphical way. Here is the infographic that represents the Top 10 Most popular dog breeds 2017.

Don’t directly copy this image. You can use the embed code provided at the end of this post.

The Labrador Retriever, also Labrador, is a type of retriever gun dog. The Labrador is one of the most popular dogs in the United Kingdom and the United States. The modern Labrador’s ancestors originated on Newfoundland’s island, now part of the province of Newfoundland and Labrador, Canada.

The German Shepherd is a breed of medium to a large-sized working dog that originated in Germany. The breed’s officially recognized name is German Shepherd Dog in the English language, sometimes abbreviated as GSD and formerly known as the Alsatian in Britain.

The Golden Retriever is a large-sized breed of dog bred as gun dogs to retrieve shot waterfowl such as ducks and upland game birds during hunting and shooting parties and were named ‘retriever’ because of their ability to retrieve shot game undamaged.

The Beagle is a breed of small-sized hound, similar in appearance to the much larger foxhound. The Beagle is a scent hound developed primarily for hunting hare.

The French Bulldog is also known as the Frenchie, is a small breed of domestic dog. Frances resulted in the 1800s of a cross between bulldog ancestors imported from England and local ratters in Paris.

The poodle is a group of formal dog breeds, the Standard Poodle, Miniature Poodle and Toy Poodle. The origins of the poodles are still discussed with a dispute over whether the poodle descends from the old French Barbet breed or Germany as a water dog type.

The Rottweiler is a breed of domestic dog, regarded as medium-to-large. The dogs were known in German as Rottweiler Metzgerhund, meaning Rottweiler butchers’ dogs, because one of their uses was to herd livestock and pull carts laden with butchered meat to market.

The Yorkshire Terrier is a small dog breed of terrier type, developed during the 19th century in Yorkshire, England, to catch rats in clothing mills.

The Boxer is a medium-sized, short-haired breed of dog developed in Germany. The coat is smooth and tight-fitting; color is fawn or brindled, with or without white markings.