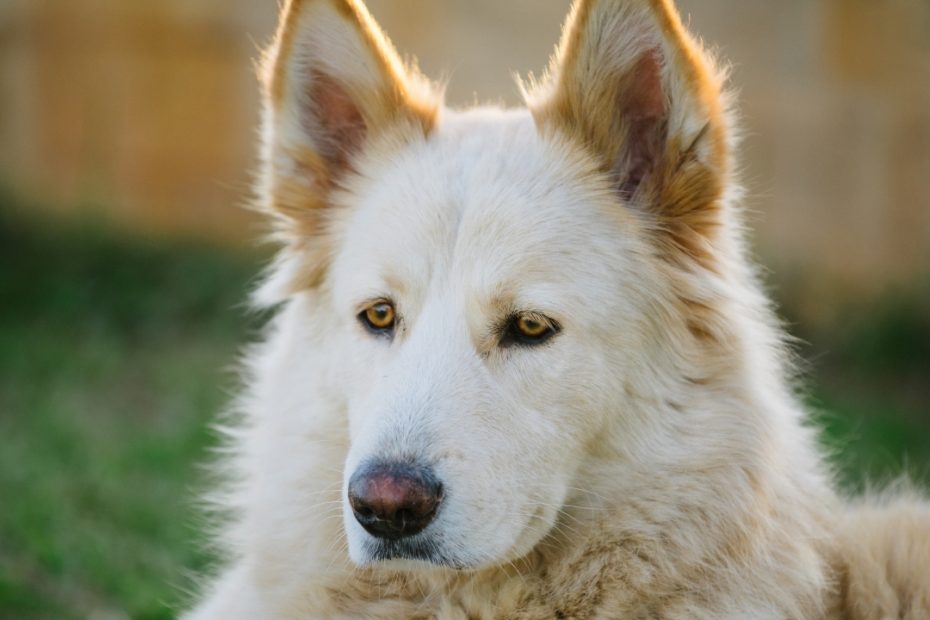 The Northern Inuit Dog is a crossbreed with a debated background, but most recognize that the Husky, Malamute, and German Shepherd Dog are part of their family. These Calm, friendly, and intelligent dogs may be a great addition to your family.

Though their origin is a mix, they’re now only bred with other Northern Inuit Dogs by breeders seeking to secure purebred status for this crossbreed.

Northern Inuit Dogs may look like wolves, and their temperament is very different. However, they’re usually great family dogs and will not show aggression towards their humans.

They have a stubborn streak and may be challenging to train, so that these dogs would be most suitable for experienced pet parents. Since they are so active, they would also prefer a house with a yard.

Northern Inuit Dogs are not yet recognized as their purebred breed with the American Kennel Club. Aligned with the heyday of crossbreeds, in the 1970s and 80s, the Northern Inuit Dog was the answer to people wanting a domesticated dog that was as wolf-like as possible.

Northern Inuit Dogs are loyal and friendly, making them much better-suited to family home life than their wolf lookalike cousins.

Northern Inuit Dogs are a healthy breed, standing up to 32 inches tall and weighing above 100 pounds. They are built with a small, slim frame that still holds a fair amount of muscle, but not to the point of being overt or bulky.

Northern Inuit Dog’s faces are incredibly wolf-like, with a relatively trim skull width widened in appearance by additional hair and a long, narrow muzzle capped with a black nose. Their ears are tall and pricked, and their eyes are oval and come in every color.

They have comparatively long legs, a deep yet somewhat narrow chest, a straight back with a slight curve over the hindquarters, and well-muscled legs, particularly in the back.

Coat & Color: Northern Inuit Dog’s coats are highly wolf-like and relatively long and dense with a thicker, softer undercoat and come in a wide variety of colors, including pure black, pure white, gray, sable, and fawn.

Suitable For: Kids and is known to be playful, energetic, and affectionate around them.

Northern Inuit Dogs are very friendly and loyal, and they’re greatly more likely to make friends with strangers than are excellent guard dogs. They’re excellent family pets, particularly if you can train and socialize them early.

Northern Inuit Dogs are intelligent, intuitive, and active, so they thrive with lots of time outside, including walks and playtime every day. They’re playful and pleasant creatures, so the more interaction for them, and the better!

Many medium-sized dogs are prone to forming elbow and hip dysplasia, with the Northern Inuit Dog being no exception. When joints form improperly, they lead to localized pain and inflammation over time. In addition, affected animals will show lameness that worsens as they age.

The Male Northern Inuit dogs can be prone to cryptorchidism, which is more generally known as retained testicles, a condition where one or both testes do not drop down into the scrotum. This situation seems particularly prevalent in white dogs.

The Northern Inuit dog Association is working hard to reduce this condition by testing any dogs not cleared by parentage before accepting the dog into the breeding program. This disease is found in many breeds of dogs, so this is not a breed-specific disease.

Achondrodysplasia is an intrinsic disease of cartilage and long bones that presents a form of dwarfism. Some cross dog breeds traditionally have been classified as achondroplastic based on their phenotypic appearance.

Grooming & brushing is a crucial part of routine pet care. Regular grooming and brushing improve the positive relationship bond between your dog and you.

The weather-resistant coat of the Northern Inuit Dog should be combed and brushed frequently. Bathe only when required as it eliminates the natural oils in the skin. The dogs should not be bathed too frequently.

Their coats are designed to repel dirt, and bathing them too often could cause them to lose these properties. In addition to brushing your dog, be sure to brush their teeth, clean their ears, and trim their nails regularly.

Premium-quality dry dog food assures nutrition for full-grown northern Inuit dogs and can mix with preserved food, water, or broth. Your northern Inuit dog may like cottage cheese, fruits and vegetables, and cooked eggs, but these should be less than 10 pct of their daily food allowance.

Northern Inuit Dog’s dietary needs will change from puppyhood to adulthood and will continue to change into their senior years.

Northern Inuit Dogs do not require excessive amounts of exercise, rather enjoying several long walks a day. It is also advisable to provide them with a large, secure outdoor space where they can roam, and it would not be sensible to keep such an active breed within a small home.

Northern Inuit Dogs have very high energy. They will need one long walk or two shorter walks every day. They should be getting at least 60 to 90 minutes of exercise daily. They do not require excessive amounts of exercise, rather enjoying several long walks a day.

Friendliness with Kid’s, Family & Other Dogs

Northern Inuit Dogs ordinarily get along extremely well with children. These dogs are great family dogs, faithful, affectionate, and happy. However, because these dogs have great energy and are on the larger side, supervision is recommended with young kids, and children need to learn how to interact accurately with their dogs.

Northern Inuit Dogs are puppies play can be a bit rough, and throughout their lifetimes, they can have a stubborn streak. Anticipatory socialization and training are essential to bringing out the best in these dogs. Training can be further challenging with this breed, so the earlier you start, the better.