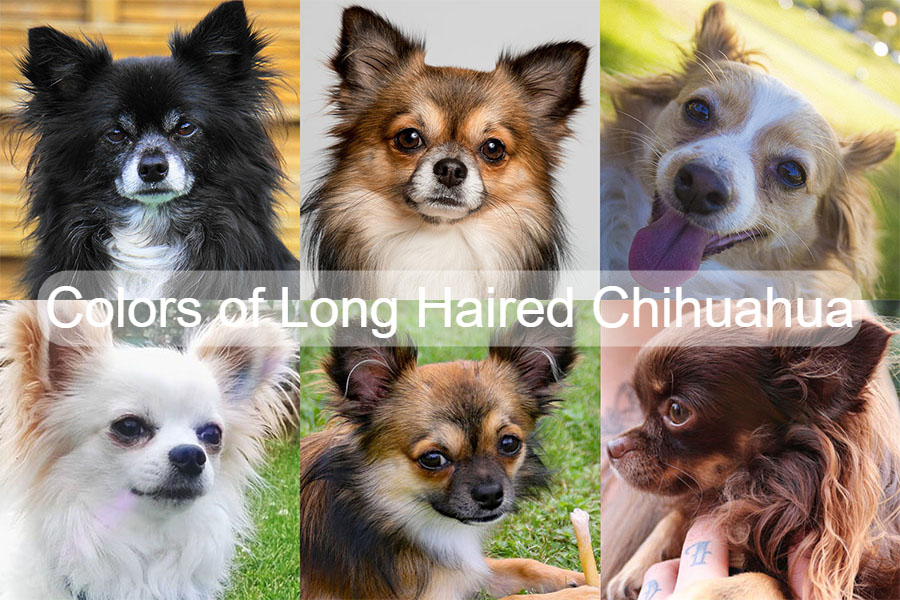 Chihuahuas are available in a variety of sizes, colours, and coat types. They come in two coat types.

In this post we will discuss about Long-haired chihuahua.

Long haired chihuahua is an awesome dog breed with a big heart and is known for being highly devoted to people and pack guardians. They are the world’s tiniest dogs and very loyal to their masters. These energetic dogs thrive in limited areas and are well-suited to city life. Chihuahuas are a favourite of many dog lovers due to their popularity and fashion status.

The most popular coat colours of this breeds are fawn, cream, and red, while the rarest colours and patterns are solid white, solid black, golden, and silver. Whatever coat type, colour, or pattern your little furry companion wears, you are guaranteed that this breed is a delightful and loving pet because it is in the breed’s nature.

If you want to adopt your In this post we discuss about “Different Colors of Long Haired Chihuahua”.

The AKC recognises the colours of Chihuahuas

In the United States of America, the American Kennel Club (AKC) keeps records of purebred dog breeds. According to the breed standard, a chihuahua’s coat can be single-coloured or patterned. They also give a list of specific coat colours, patterns, and combinations for each dog breed. We can see that there are some colours that are considered conventional and other colour combinations that are defined as alternate for the Chihuahua. There are more than 30 colour combinations to choose from. 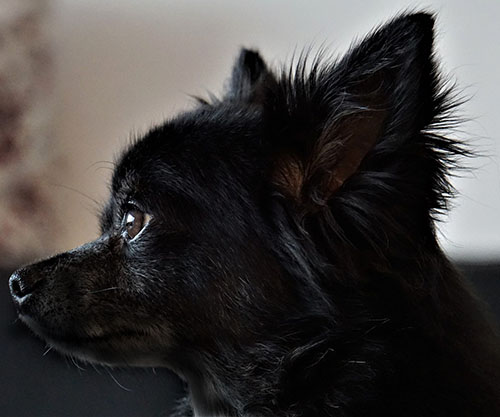 Long-haired and short-haired Chihuahuas can both be black. A full-bodied, solid-black, long-haired chihuahua is quite unique and rare. Many black Chihuahua dogs will have some type of body marking. Pure black Chihuahuas are extremely unusual, and chances are you’ve never seen one.

Despite this, black is the most prominent colour in Chihuahuas genetically, so it’s rather common. However, it’s generally accompanied by a few splashes of white or another colour.

Despite the fact that “at least three dominant genes result in solid black,” dominant genes are easier to breed out than recessive genes, which is why a pure black Chihuahua is so rare.

You might think that a Chihuahua’s colour is solid black. But there are several subcategories of black colour. These are some of them: 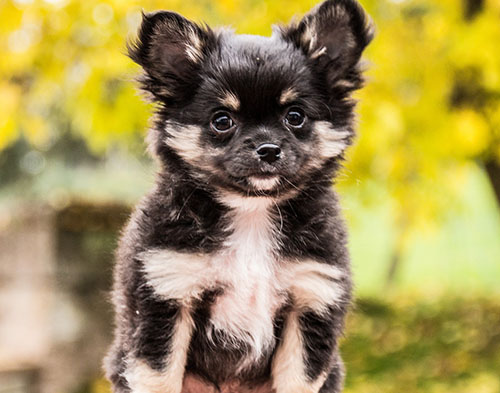 Chihuahua dog breeds come in a variety of colour combinations, including black and white. The combination in Chihuahuas can range from a small amount of white on the chest to greater white patterns on other sections of the body.

The genetics of black and white dog coats are simple: the eumelanin pigment is expressed in the black regions of your Chihuahua’s coat, while the white parts have no coat colour pigmentation. The black pigment results in a black muzzle, eyes, and eye rims. 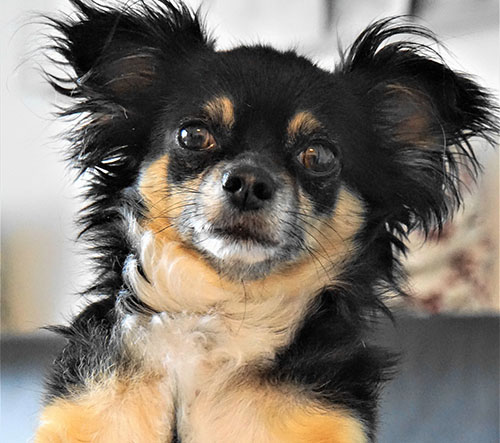 These Chihuhuas are mostly black with tan patches on the face or chest. 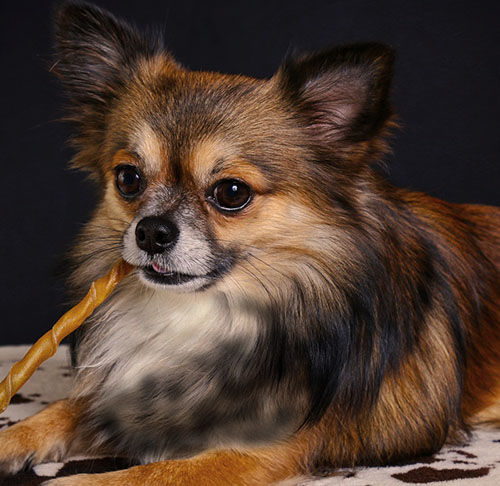 Do you think chihuahuas have three colours? In a black Chihuahua, there are three hues. They’ll be wearing black, tan, and white on different areas of their bodies. 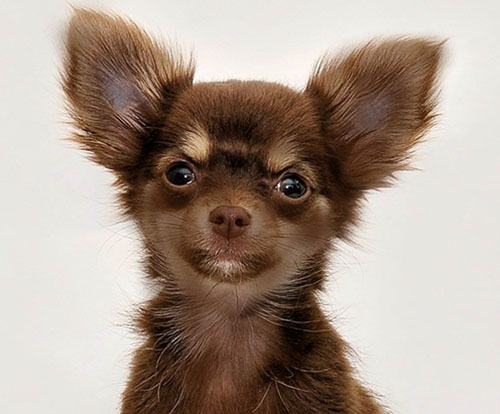 Chocolate is rarely an appropriate colour for long-haired chihuahua dog breeds, because it comes from a dilute gene that washes out the black pigmentation. Because the chocolate shade is caused by a dilute gene, these Chihuahuas’ noses are usually brown or beige rather than black.

Fortunately for chocolate Chihuahua fans, even if it isn’t especially popular among breeders, it is an acceptable colour. To be regarded as a true chocolate, a Chihuahua’s coat must be darker than those classified as brown or liver, while minor dashes of white or another colour are permitted.

There are several subcategories of chocolate colour. These are some of them: 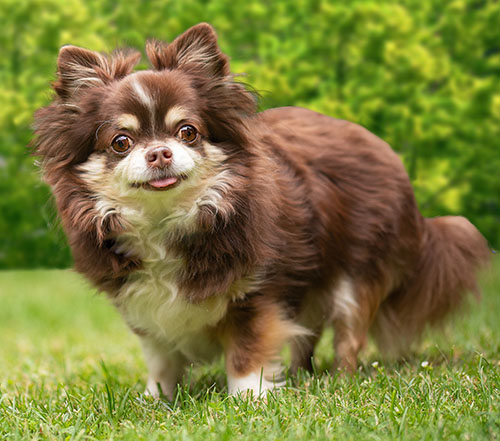 Chocolate & White: This type of long-haired Chihuahua’s coat will be chocolate, with white patches on the face, chest, and/or legs.

This type is mostly chocolate, but there are tan areas on the face and/or chest.

This type has a brown coat with various hues of brown, ranging from dark to medium to light, giving it a brindle appearance. 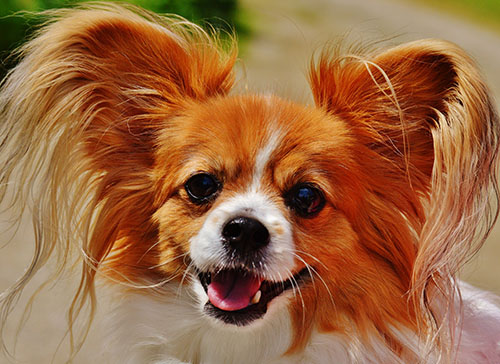 A fawn long haired Chihuahua looks exactly like a young deer. When you think of a Chihuahua, the first image that comes to mind is generally of a little, yellowish dog with large ears. This is due to the fact that the fawn Chihuahua is one of the most popular.

This could be owing to the popularity of the deer-head Chihuahua, which has a V-shaped head rather than the AKC’s traditional “apple dome” skull. It was called the “small yellow dog.” 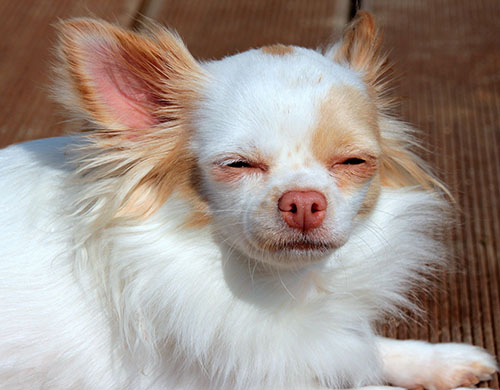 Because Chihuahuas’ coat colours change as they age, a puppy that appears to be pure white may develop a yellowish hue as it grows older, which could be upsetting for a breeder hoping to produce the rare but attractive white Chihuahua.

Cream Chihuahuas’ coats can be almost white, but they all have some red in them, giving them a soft apricot tinge that gives them their creamy colour. The majority of cream Chihuahuas have light skin, but black noses and eye rims. 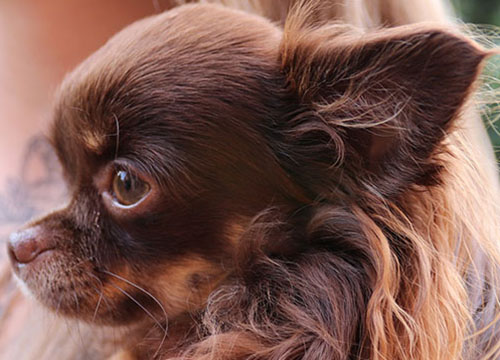 The pheomelanin pigment is responsible for the redness in a long-haired Chihuahua’s coat and can generate a variety of colours based on the genetic interactions of the parents. Some of these Chihuahuas have a rich reddish-brown tone, almost mahogany in colour, while others have brilliant red coats with darker hairs.

Most red Chihuahuas have black noses, paws, and eye rims because this pigment only affects the colour of the coat, not the skin. 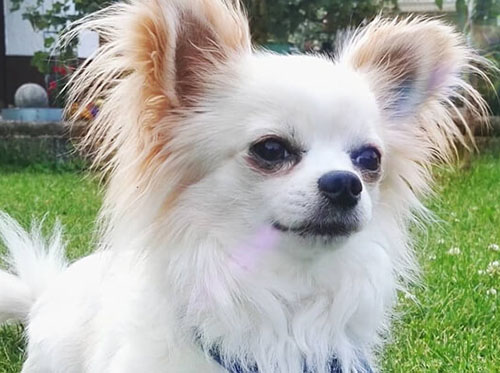 White colored long-haired Chihuahua is extremely rare. Albino Chihuahuas are not the same as white Chihuahuas, yet both are caused by a lack of pigmentation. The white Chihuahua lacks melanocytes, which give the coat its colour, but they do have quite enough eumelanin to have black eyes, noses, and paws. It’s possible that they have a pink nose.

There are several subcategories of white colour. These are some of them:

The long-haired chihuahua versions carry this colour combination off particularly well, whether fully red or mostly white with a few red patches. The red and white Chihuahua resembles an Irish Setter in size.

When a Chihuahua’s coat is multi-coloured, the darker colour is worn on top while the lighter colour is worn on the chest, face, nose, toes, and belly. This is true of both fawn and white Chihuahuas, though very light fawn puppies can make distinguishing between the two hues difficult. Depending on their genetic make-up, fawn and white Chihuahuas can have either a liver or a black nose. 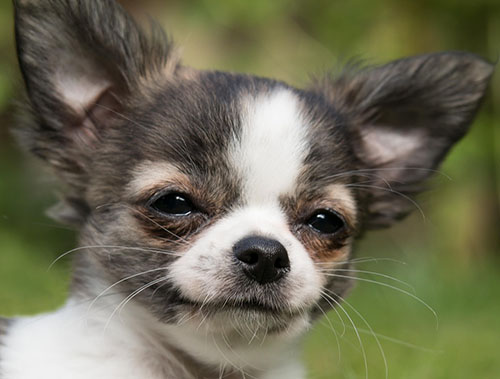 Although blue is a popular colour in various dog breeds, it is exceedingly rare in Chihuahuas. Blue chihuahua does not mean that solid blue, but it is somewhere between grey to light blue. A blue Chihuahua puppy can only be bred by two parents who share the same recessive gene that dilutes the black pigmentation. Breeding for a recessive gene is usually regarded as unethical because it decreases the gene pool, possibly resulting in problems later on. 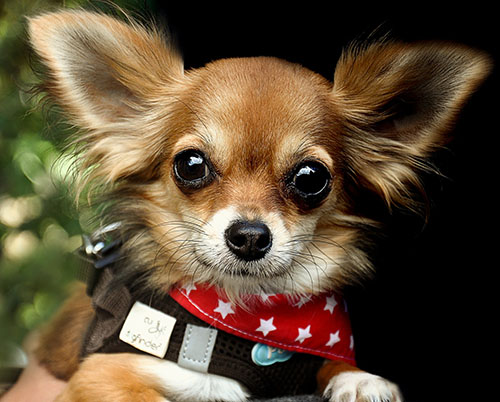 Like a red chihuahua, red Pheomelanin pigment produces a gold coat color. Gold Chihuahuas are not the same as golden Chihuahuas, which are a strange hybrid between the Golden Retriever and the Chihuahua. They range in colour from almost creamy to golden brown. A gold Chihushua’s nose can be black or liver-colored, depending on the type of eumelanin pigment. 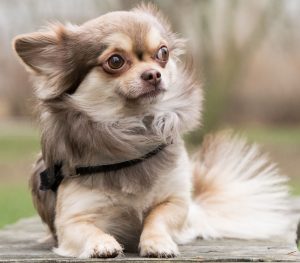 Like blue colored Chihuahuas, silver is the result of a recessive dilution gene. The silver coloured Chihuahua isn’t actually silver, but rather a mixture of grey and white hairs that gives them that hue. Silver is listed as a recognised Chihuahua colour and even has its own registration code, implying that breeders either believe it exists or prefer to give a greyish colour coat the more exotic title of silver.

Got some questions? Or some suggestions? That’s why we’ve got a comments section on this blog! You can feel free to leave a comment or two down, below and we’ll get back to you as soon as possible!