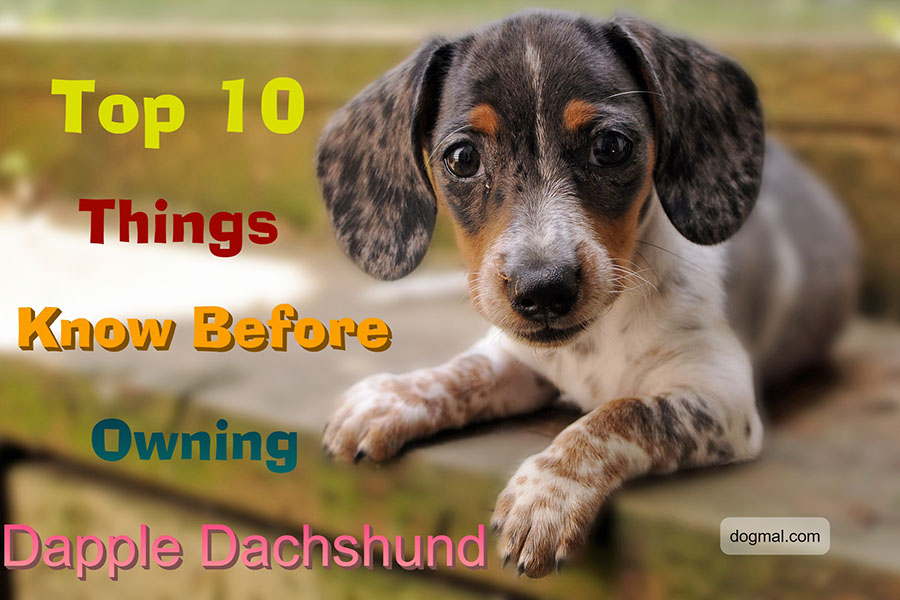 These Dachshunds are simply Dachshunds with a unique coat pattern. The pattern is known as dappling, and it consists of lighter marks on a darker base coat colour. A hereditary mutation causes some Dachshunds to develop this dappling pattern while others do not.

One of the most sought-after features of dapple Dachshund canines is their dapple pattern. The dapple pattern is available in a variety of colors.

Because of their intelligence and kindness, as well as their small size, they make wonderful pets. Dapple dachshund puppies are attractive dogs. These dogs have a strong bond with their owners. From afar, they appear to be sweet-natured lap dogs, but they are really ambitious hunters at heart.

If you want to add a dapple Dachshund dog into your family, then it is very important to know some basic things about dapple Dachshund. In this post, we describe “7 Things You Should Know About the American Bully”.

There are two sizes of Dapple Dachshund: small and standard:

9. There are Three types of coat

Wirehaired Dapple Dachshunds have a soft undercoat and a rough outer coat on their bodies. Their hair is longer, giving them a distinct appearance. Wirehaired Dachshunds shed a little as well.

Coat comes in Black and cream, black and tan, chocolate, chocolate and tan, and more colours. Spotted patterns are often known as dapple or merle.

Adopting or buying a Dapple Dachshund puppy is a big responsibility. Make sure puppy is at least eight weeks old when you adopt from a rescue or a breeder.

A reputable breeder will match you with the ideal puppy. A good breeder will reply to your questions. Choose a breeder who is not just willing but eager to assist you in training and caring for your new dog.

Avoid breeders who just seem interested in selling puppies as rapidly as possible. Breeders who sell puppies “with papers” for one price and “without papers” for a lesser price. If you buy a make sure it comes with all of the necessary paperwork.

A professional breeder will be honest and open about the breed’s health issues and the frequency with which they arise in her lines.

A Right breeder who tells you that the breed has no known problems and it is 100 percent healthy.

Make sure your breeder understand your rights and recourses.

Do not buy a puppy from a breeder who cannot give you documented proof that the parents have been cleared of any breed-related health issues. A “vet checked” certificate is not a substitute for genetic health testing.

Don’t ever purchase a puppy from a pet store. At a pet store, you’re more likely to get an unhealthy, sick, unsocialized, and difficult to housetrain puppy and will be supporting the cruelty of high-volume puppy mills.

Prepare Your Self and Your Family For New Member

Make sure you’re prepared for Adopting Dapple Dachshund because it’ll change your life forever. Is your family alright with your choice? Will you be able to give him time apart from your work?

Following the adoption, you will have a number of tasks to fulfil. You’re going to welcome a new family member into your home. You must take proper care of it.

So think properly and after take desicion to adopt Dapple Dachshund.

Will Your Wallet Can Handle It?

Dapple Dachshund demands a lot of attention, which can soon add up to a large expense. When you have a dog, you must spend money on their routine and emergency vet appointments.

You’ll have to spend money on his food, treats, toys, bedding, collar, and vet checkups, among other things. As a reason, make sure you’re prepared for the expenses.

What Is A Double Dapple Dachshund?

Double-dapple dachshunds have been introduced to the United States between 1879 and 1885.

Suitable For: People, Children, and Families

Energy Level: Varies From One Dog To The Next

Brushing: Brushing Once a Week or Less

Compatibility With Other Pets: good

Their powerful bodies are supported by small, stubby legs. They’ll have huge brown or blue eyes that are quite adorable and sweet. They also have long floppy ears, which you will notice. These flimsy ears are supposed to help them detect scents, but they just flip inside out all the time, making them look silly.

A Dachshund Dapple has amusing small paws that curve outward and are paddle-shaped to help in digging. Their muscles give them a forceful look, which is expected. He moans for below-ground functions and beats the bush because of his hunting spirit nose, loud tongue, and unusual build. He has an advantage over most other breeds because of his excellent sense of smell.

Dapple Dachshunds have a temperament similar to any other Dachshund. This is a dog breed that is kind, brave, and self-reliant. They want to protect their family from strangers and can be excellent watchdogs.

Dachshunds build strong connections with their owners and may feel jealous if their owner’s attention is diverted to someone else. Dachshunds make faithful companions despite their small stature and hunting history. They are extremely loyal to their owners, and if you can build a trusting bond with them, there is nothing these brave and protective dogs will not do for you.

They have very close bonds with their family. It makes an excellent household pet. This breed can be affectionate and fun with their family members. They can be a nice companion for a child if they have been raised around children.

However, because they are small and have a long back, they could be easily damaged by a child who is unfamiliar with dog care and treatment. When kids are around a Dachshund, keep an eye on them. Also, while a Dapple Dachshund may be excellent with his family’s children, they may become jealous or bark at a child’s visitors.

Able to live well in an apartment

Dapple Dachshund adapt well to a variety of climates and have no trouble living in apartments. They don’t require a yard if you can take them out regularly. They might not be capable of surviving in your backyard. Living outside can be harsh and harmful for your dapple Dachshund since they become so attached to family members.

4. Where does a dapple dachshund live?

They mainly live with people in human communities. These dogs require a lot of affection and care from their human companions. A dapple dachshund is a small dog breed that resides in its owner’s home, often joining their human companion on walks or even accompanying them on vacations.

They also enjoy exploring grasslands and open meadows. They’ll need their own bed, food bowls, and water dishes, as well as a good feeding schedule, or at least an idea of when the next meal is due.

Due to their stubbornness, Dachshunds can be tough to teach. They’re also recognised for being self-sufficient. As a result, while this breed is bright, it is not easy to teach. To achieve the best results, employ a positive training strategy that includes rewards when training your dog. Punishment or being too harsh will not go down well with Dachshunds and will not produce the desired results.

Despite the fact that these Dachshunds are not a high-energy breed, ensuring that they get enough exercise is critical for their health. You want their muscles to be strong enough to support their lengthy backs. Take your Dachshund on at least two walks every day to ensure they get the exercise they require. You can even play with them at home to get some extra exercise.

2. How to Care Dapple Dachshund?

Give them proper food

High-quality food should be fed to dapples dogs. Because it is critical that this breed does not get overweight, you should work closely with your veterinarian to select the best food and serving size for your dog. Due to their small stomachs, Dapple Dachshund pups require smaller meals than adults.

Puppies under the age of six months should be fed little amounts three or four times per day. Obesity can put too much strain on their already stretched back, resulting in a painful herniated disc.

Clean their ear’s twice a week. Brushing your dog’s teeth is also important to avoid plaque and tartar buildup, as well as dental illness. They should also need their nails clipped.

The following are some of the probable health difficulties that these Dachshunds may face:

Got some questions? Or some suggestions? That’s why we’ve got a comments section on this blog! You can feel free to leave a comment or two down below, and we’ll get back to you as soon as possible.