Home » Dog breed » German Shepherd vs Shiloh Shepherd – Which One is The Best?

German Shepherd vs Shiloh Shepherd – Which One is The Best? 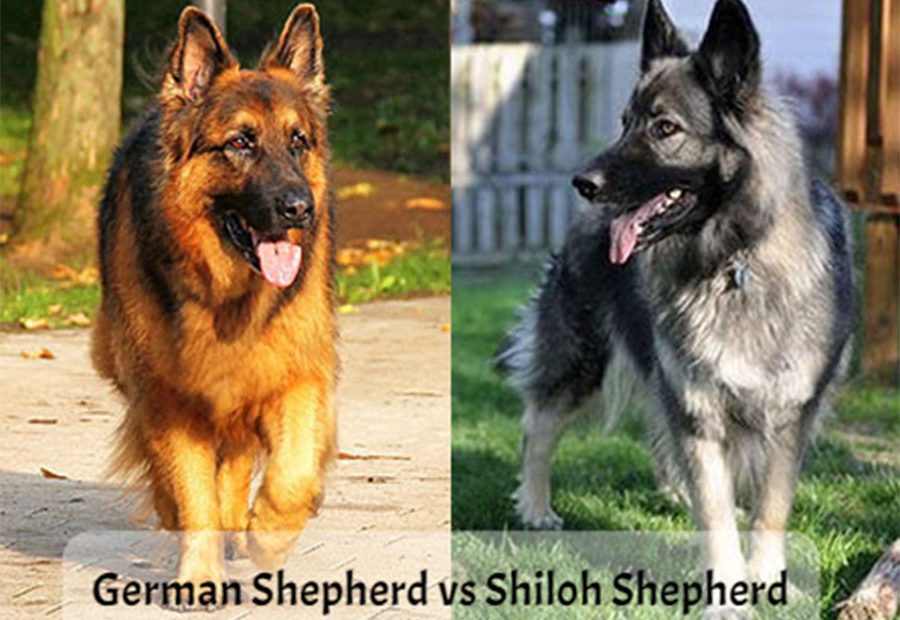 Can you compare the Shiloh Shepherd to the German Shepherd?

There are some major differences to consider if you’re picking between these two breeds. In this list, we include some of the basic differences between Shiloh Shepherd and German Shepherd.

The German Shepherd was created in the late 1800s in Germany. Captain Max von Stephanitz is credited with founding the breed. The word “German” was dropped during World Wars I and II, and the breed was known as the shepherd dog. They were trained to work as police dogs. In the early 1900s, global interest in the breed grew, and the American Kennel Club (AKC) recognised the GSD in 1908.

Shiloh Shepherds weight is around 100 to 130 pounds.

Females German Shepherds will be between 22 and 24 inches tall while Male Shiloh Shepherds height is between 24 and 26 inches at the shoulder.

German Shepherds weight is around 75 to 95 pounds.

Shiloh Shepherds have two coat types: smooth and plush. Smooth-coated Shiloh Shepherds should have a thick, double coat with the outer coat laying close to the body and the forelegs and hind legs having significantly longer hair. Shiloh Shepherds with plush coats may not have as coarse a coat as those with smooth coats.

Hair should be shorter on the sides of the body, face, forelegs, and feet in either style of coat, but longer on the shoulders and neck, along the back, and on the underside of the tail in either type of coat. It’s best if the coat isn’t too lengthy. It shouldn’t be more than 3 inches on the chest and 6 inches on the legs.

Shiloh Shepherds are available in the same wide range of colors as German Shepherds, and the standards are comparable, with the exception that Shiloh Shepherds can be completely white.

The German shepherd dog has a double coat that is medium in length. German Shepherds come in a variety of colors, and the AKC allows for most of them. The coat is dense, and the outer coat is flat to give it a sleek appearance. The hair on the hind legs and the backs of the forelegs is usually a little longer, and the hair on the neck is also longer and thicker. They should be black saddles with contrasting lighter hair.

The goal was to create a Shiloh Shepherd dog that resembled a German Shepherd but was larger and had a softer, gentler temperament. Due to this reason, Shiloh shepherds are considerably calmer and easier to handle than German shepherds.

Though some Shilohs have stronger activity and drive than others, and some can do difficult activities such as search and rescue, the Shiloh is not a “working” breed, and as breeders, we want to produce a calmer, social, multi-talented companion dog.

Shilohs also have a “softer” disposition than German shepherds, preferring to go with the flow and posing less of a training challenge to their owners.

The German Shepherd is known for having a brave and compassionate temperament. They aren’t normally rude to strangers, but they don’t make friends quickly. German Shepherds are not afraid to bravely defend their home and family, as timidity is not one of the breed’s characteristics. They are not a nervous breed, but they are a very strong dog breed.

7. Difference due to Exercise Requirement

The Shiloh Shepherd dog has a lower energy and drive requirement than a standard German Shepherd. They are non-stop powerhouses, just like German Shepherds. Their energy levels are better suited to a busy family than challenging work.

German Shepherds are active working dogs who require work to feel fulfilled. When they are excited, they can be difficult to handle and require lengthy training with a firm hand to be able to resist impulses.

8. Some Important Difference between both Breed

The German Shepherd Or The Shiloh Shepherd dog: Which Is A Better Family Dog?

At last question that arises is which breed is best bred. The German shepherd and the Shiloh Shepherd are both excellent family dogs, but only the Shiloh Shepherd was bred particularly for that family dog purpose. Shilohs are less aggressive with visitors and have more empathy for your family than German Shepherds.

Got some questions? Or some suggestions? That’s why we’ve got a comments section on this blog! You can feel free to leave a comment or two down, below and we’ll get back to you as soon as possible!