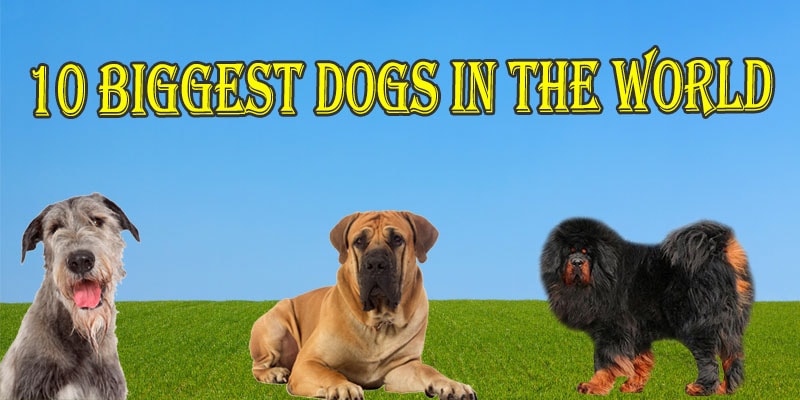 Some people like big things and it extends to their dogs too. There are many biggest dogs breed, each with different health care and training needs. Today I will show you a list of the biggest dogs in the world. Big dog breeds that were bred to work all day will need daily activity to work off their energy

Here is a list of the top 10 biggest dogs breed in the world.

Now we are trying to describe each dog in a list of the biggest dogs breed in great details. Let’s start with the first one. 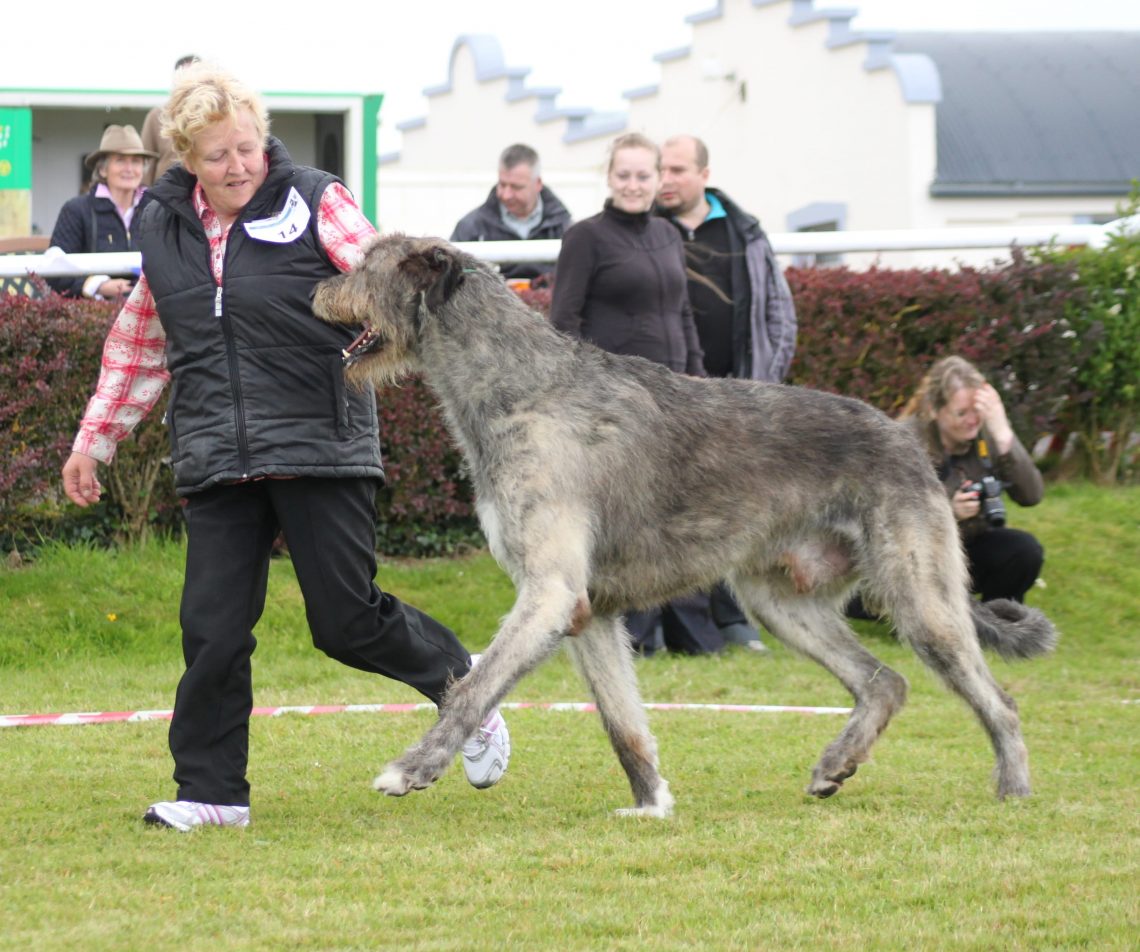 Irish Wolfhounds are sweet-tempered, patient, kind, thoughtful and very intelligent, that’s the reason why I placed first in a list of the biggest dogs.  The Irish Wolfhound is easy to train. These giant dogs need lots of space to run but do not need any more exercise than smaller breeds. This breed originated in Ireland, where he served as both a war dog and hunting dog. 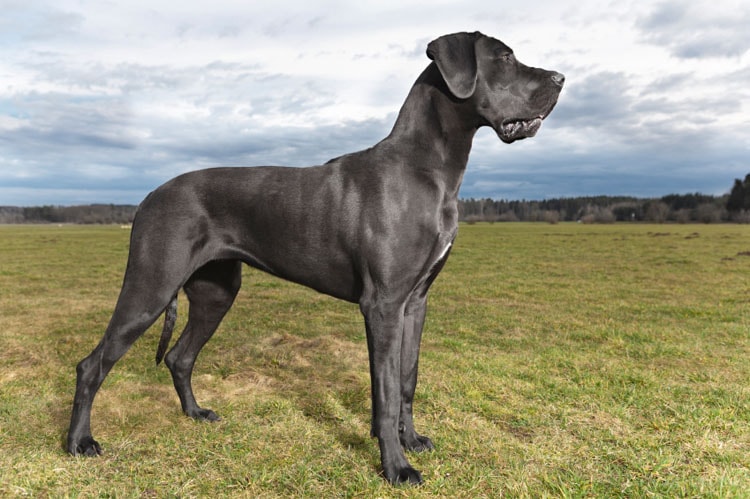 The Great Dance originated from Germany and is one of the biggest dogs breed. They considered the world’s second-tallest dog breed after Irish Wolfhounds. Great Danes are huge, powerful and elegant dogs.

They are good for simple, loving and playful children. The Great Danes are considered easy to train, but some Great Dane fanciers say that individuals can be stubborn learners.
The Great Dane was originally bred to hunt wild boar the Great Dane was developed from Mastiff-type dogs, the breed is thought to have been around for more than 400 years. In the 18th century, Great Danes were prestigious guardians of estates and carriages. In 2012 the Guinness Book of World records entitles a Great Dane Named Zeus as the tallest dog in the world.
Great Danes are generally healthy, but like all breeds, they’re prone to certain health conditions. This Dog may be affect some of the health  problems such as Gastric Torsion, Hip Dysplasia, Heart Disease etc. If you’re buying a puppy, find a good breeder who will show you health clearances for both your puppy’s parents etc.

I personally love this dog so I placed it in the second place of a list of biggest dogs in the world. 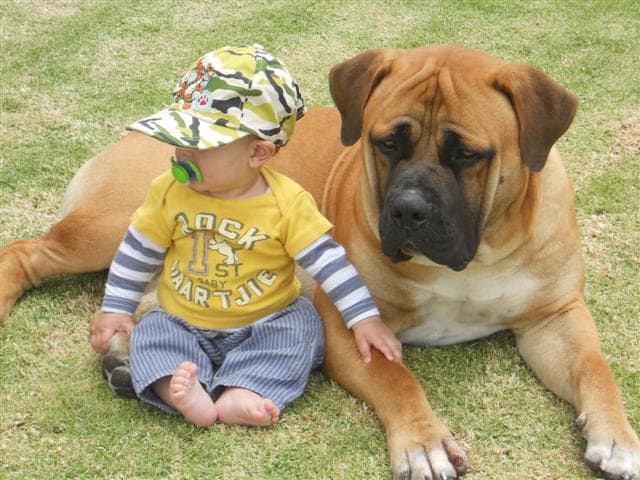 Jan van Riebeeck, an employee of the Dutch East India Company, in mid of 17th century, came to South Africa with his own a big Mastiff type dog. The Boerboel has a short, dense, and sleek coat which is brown, black, fawn, red, yellow,  or light, dark with possible white markings on the head, neck, chest, and legs. Boerboels have a short and dense coat that is easy to groom and Generally, a healthy breed. 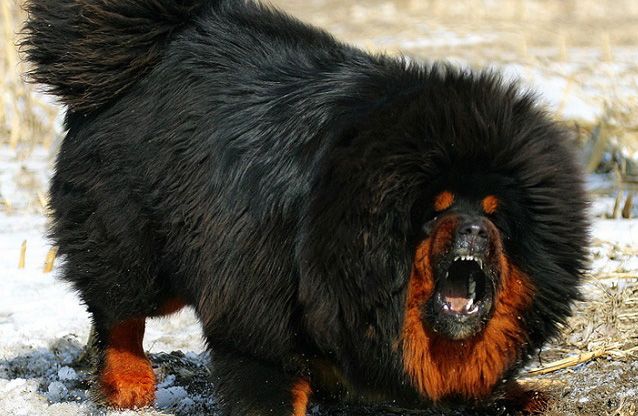 The Tibetan Mastiff is a massive, giant dog with sturdy bone structure.  The broad muzzle is square when viewed from all sides. The large nose is black. The teeth meet in scissors or level bite. This is a one of the best dog breed and one of the largest dog breed.

Good with Kids: This is a suitable breed for kids and is known to be playful, energetic, and affectionate around them and This breed is best for those who have previous experience with dog ownership it’s not good for new Owners.
Health Problems: –  Prone to hip dysplasia, thyroid problems, skin conditions and ear infections. Also, a genetic problem called Canine Inherited Demyelinative Neuropathy which is fatal 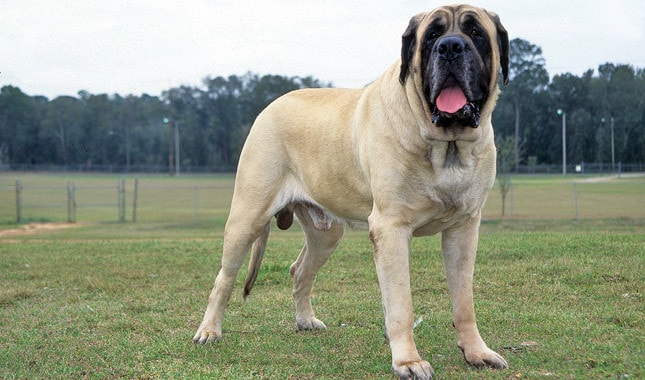 The Mastiff is a very massive, powerful, muscular dog. Dominance levels vary, even within the same litter, but it is often called a gentle giant. The Mastiff is considered a breed with a short lifespan, but some Mastiffs have lived to 18 years of age. The Mastiff is a particularly large dog demanding correct diet and exercise. 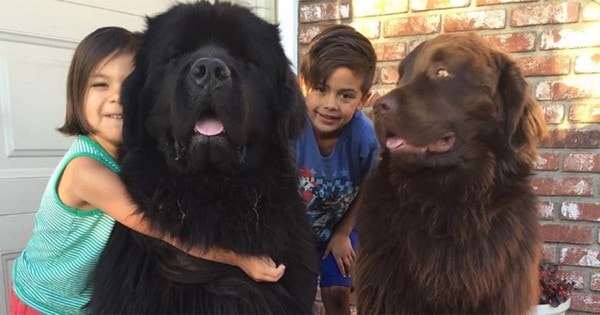 It is an outstanding, sweet temperament, courageous, generous, peaceable and intelligent. They are very devoted, loyal and trustworthy dog breed. These are the big dogs with long hair.

The Newfoundlander hails from the coast of Newfoundland, where it was a popular working dog, both on land and water. The Newfie was so accomplished in its ability to save the drowning that at one time they were required at lifeguard stations along the British coast.

This dog is prone to serious health conditions such as gastric torsion, Sub-Aortic Stenosis, cystinuria, canine hip
dysplasia, epilepsy, and elbow dysplasia, and minor issues like von Willebrand’s Disease, cataract, ectropion, cruciate ligament rupture. If you love dogs with the longest hair, this is the perfect choice for you. 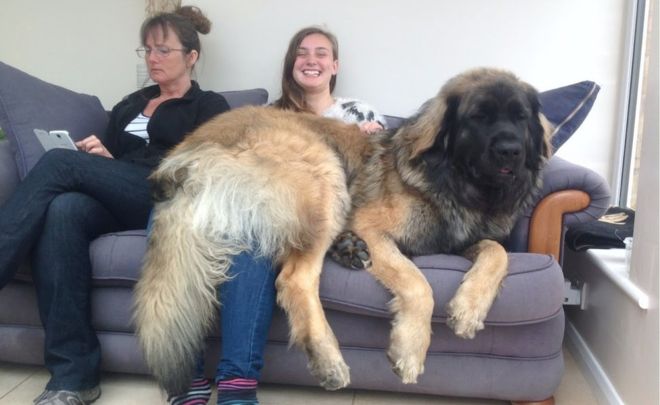 The Leonberger is a giant dog breed. The breed’s name derives from the city of Leonberg in Baden-Württemberg, Germany. This Mountain dog comes with a generous double coat the Leonberger is a large, muscular, and elegant dog with balanced body type, medium temperament, and dramatic presence.

This is a very large, muscular working dog. The head is rectangular shaped and deeper than it is broad. Males’ heads are generally larger than females’ heads. This breed is best for those who have previous experience with dog ownership, but it’s not good for new Owners.
The Leonberger appeared in Leonberg, Germany in 1846. Originally, the Leonberger was an attempt by Herr Heinrich Essig to create a dog that looked like a lion, part of the crest of Leonberg. During World War I, the breed nearly became extinct. The breed has a modest but growing following in the United States; United Kennel Club recognized the Leonberger in 1991. 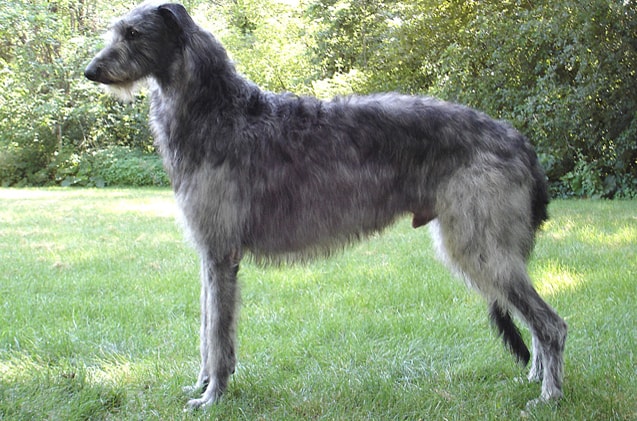 The origins of the Scottish Deerhound are lost in the Highland mists. The Deerhound is closely related to the Irish Wolfhound and was the main contributor to the recovery of that breed when it was re-created at the end of the 19th century. Over the centuries, they’ve been known as Irish wolf-dogs, Scottish greyhounds, rough greyhounds, and Highland Deerhounds. Today the Scottish Deerhound ranks 135th among the 155 breeds and varieties registered with the American Kennel Club. 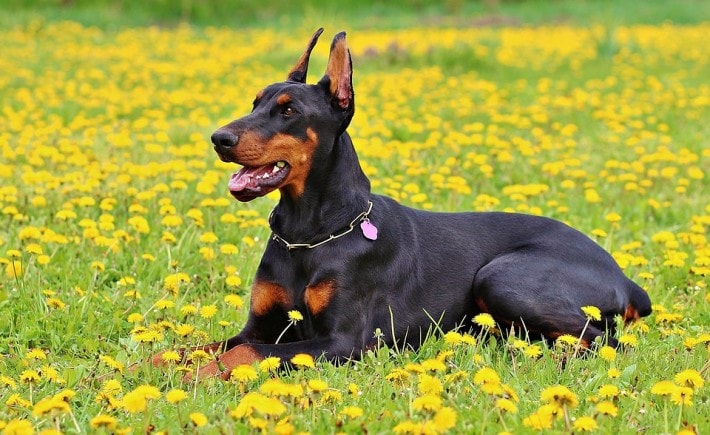 Dobermann has also known as the Doberman Pinscher originated in Germany, nearly 1890, discovered very intelligent, loyal and fearless dogs. Dobermann is about nine positions in Top 10 Biggest Dog Breeds in the World 2017, is being used by police forces in security activities guard dogs, as rescue dogs and as guide dogs for blind people. The Doberman is compactly built, muscular, powerful and square-proportioned.

This breed is well suited for those who have little experience with dog ownership because the Doberman Pinscher has ranked amongst the most intelligent of dog breeds in experimental studies and expert evaluations. Dobies are generally healthy, but like all breeds, they’re prone to certain health conditions like Von Willebrand’s Disease, Progressive Retinal Atrophy, Hip Dysplasia, Hypothyroidism, Cardiomyopathy etc. 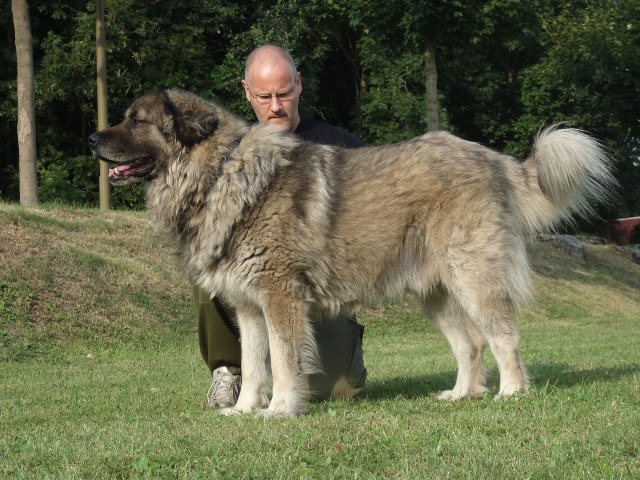 The Caucasus mountains are home to some of the oldest living Molosser breeds, Although its first official Show-Ring appearance outside the Caucasus was in the 1930s in Germany, It’s a popular working, police and guard dog throughout Europe and the former Soviet Union states.

The Caucasian Shepherd Dog is generally healthy and long-lived, averaging on a lifespan of 10–12 years. Some dogs may be faced with health issues in the form of hip dysplasia, obesity and occasional heart problems, but Exercise and playtime is a crucial part of the Caucasian Shepherd dog’s life to help prevent obesity.

The Caucasian Shepherd is not recommended for apartment life. They need space and will do best with at least a large yard. Because its thick coat protects it so well, it can happily cope with living outdoors provided it has proper shelter.

That’s all. I tried to include maximum information about top 10 biggest dogs breeds 2017 in the world. Continue reading if you want to know more about biggest dogs ever or subscribe to our newsletter.  Please give your suggestions if I missed anything.

What do you say?